And so begins a new adventure...

I’m very excited to announce that I will be joining Making Waves in February. It has long been a dream of mine to take on more responsibility at my work and become an architect. And so when I was approached last year with an offer as a solution architect at Making Waves, I knew that was the thing for me. Not only that, but the fact that Making Waves puts in a major effort - to say the least - in creating the best possible customer journey, won me over. I’m very passionate about what I do and this company values that; they are a group of over 500 passionate developers, designers and strategists with offices across Oslo, Stockholm, Kraków, Chicago and New York. On top of that, this is a company with a goal to create the most fantastic place to work at, placing the employee needs first. I learned that when I was invited to two social gatherings before even officially starting at the company, one of them at the famous new year’s party in Oslo that the company holds each year. That was fun! 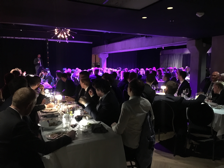 Making Waves takes great pride in what it delivers and has many customers. I’ve always had my eyes set at this company, really. This goes back to one of the very first meetups I helped arrange at the AngularJS Oslo user group in 2014, where we hosted it at the old Making Waves office in Oslo. That was a glorious day!

Some of the things that especially set this company apart from other consultancies, is that it has a strong focus on design and user experience, works to send teams rather than individuals to the customer site (or has teams working in-house) and a fair salary model where employees are economically appreciated equally. All are important traits.

And so begins a new adventure… and I’m excited and ready to embrace it.